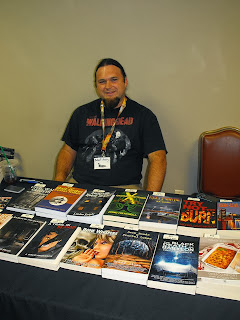 Robert Essig is tearing up the horror scene lately with a couple of novels--Through the In Between, Hell Awaits and People of the Ethereal Realm--that are knocking it out of the park. In a world still so full of zombies and teenage vampires crying over their boyfriends, his works are fresh and original, with a focus on the really scary stuff...you know, like Hell and demons. Essig has a bunch of shorts out there as well, and is pouring his evil imagination into more works soon-to-come. He was gracious enough to let me dig into his brain, so without further ado...
RT: Where did you come up with the plot for Through the In Between, Hell Awaits?
RE: The idea sprouted from a lyric in a Pantera song: whoring angel rising. I envisioned a burnt-out heavy metal groupie that feasts on the scumdogs and addicts who loiter around underground rock ‘n’ roll shows. I began writing that story and soon realized that Dagana, my protagonist at the time, was completely unlikable and vicious and would work far better as an antagonist. I took the story in a different direction and didn’t look back, writing it from beginning to end without checking the word count or taking notes. I’ll never do that again. Having no notes caused the revision process to be quite a pain in the ass. 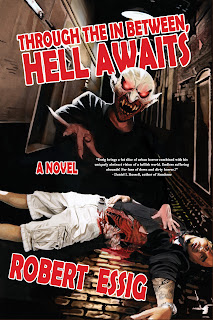 RT: Better on pancakes, ketchup or horseradish?
RE: Wasabi! Good way to wake your ass up first thing in the morning.
RT: What attracts you to the idea of demons and hell?
RE: Back in high school I was the guy drawing skulls and devils all over my desks and homework and I was told quite a few times that I was going to Hell. I would always reply, “At least Ozzy’s gonna be there.” The idea of Hell and purgatory became a fascination for me early on. I wasn’t raised in religion whatsoever, so the idea of heaven, to me, is as preposterous, just not as interesting. I remember when Jeffery Dahmer was killed in prison. It was said that he had become a born-again Christian and was going to heaven despite all the people he’d murdered and cannibalized. Really? If Dahmer’s running around in Heaven, then what kind of mad-bastards are holed up in Hell?
RT: How do you approach your dialogue writing?
RE: I make every effort to write dialogue that feels natural. I like to read it aloud to make sure a conversation is plausible. I never think in terms of how dialogue sounds on television or in the movies, unless it’s a Tarantino flick. His dialogue is usually great. Years a go I studied the Pulp Fiction script because I was so enamored by the dialogue in that film. I had to see how it looked on paper because it sure as hell sounded great on screen. I pay close attention to everyone I meet and always have, listening for what makes peoples’ voices distinct. If what I’m writing sounds like an episode of CSI then I’d better try again.
RT: Would you go to a zoo where all the animals were dressed as clowns? Why?
RE: Are you kidding me? Of course I would! The monkeys are natural born comedians, so that would work on a number of levels. And let’s not forget the giraffes--they have built-in stilts! But seriously, no, I’ve never felt the urge to visit Washington DC.
RT: Who are some of your biggest literary influences and who are you reading now?
RE: My biggest influences are Bradbury, Poe, King, Matheson, Bloch, and Barker, to name a few. I’ve been reading a lot of small press books recently by authors such as Shane McKenzie, Lisa Morton, Craig Saunders, David A Riley, and Michael S Gardner. I always read classics between new stuff and have been enjoying Robert W Chambers, Lester Del Ray, and Ambrose Bierce quite a lot.
RT: Shrubbery: overrated or necessary?
RE: Shrubbery is great to keep my neighbors’ greasy hands off my lemon tree. Bastards!
RT: What advice do you have for people working on their first novel now? 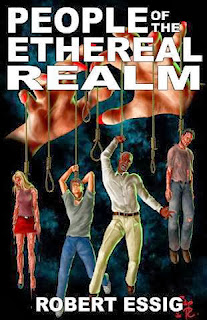 RE: Be sure to have someone beta read it. Try and read it aloud, and certainly read the dialogue aloud. Set it down for a month and write something else before you do your final read-through before submitting to a publisher. You may be surprised at what you didn’t see while revising.
RT: Who would you rather have do a music album about Through the In Between, The Wiggles or a zombie Frank Sinatra?
RE: Zombie Frank Sinatra, hands down.  He could choke out a version of “The Lady is a Tramp” that would fit Dagana nicely. Maybe The Wiggles could do back-up on a song about the finer points of murder, mutilation, and Hell.
RT: What books are you working on now?

RE: My second novel, People of the Ethereal Realm, was released in July from Post Mortem Press. I like to refer to that book as an unconventional ghost story. I have written a number of novellas that run the gamut of extreme horror to gothic monsters and hope to hear some good news from interested publishers.

RT: Thanks! Be sure to check out Robert's web page for more info: http://robertessig.blogspot.com/

Pick up Through the In Between, Hell Awaits in ebook, paperback, and audiobook from Grand Mal Press: http://grandmalpress.com/inbetween.php

Pick up People of the Ethereal Realm in Paperback and ebook: http://www.postmortem-press.com/
Posted by Ryan C. Thomas at 9:19 AM